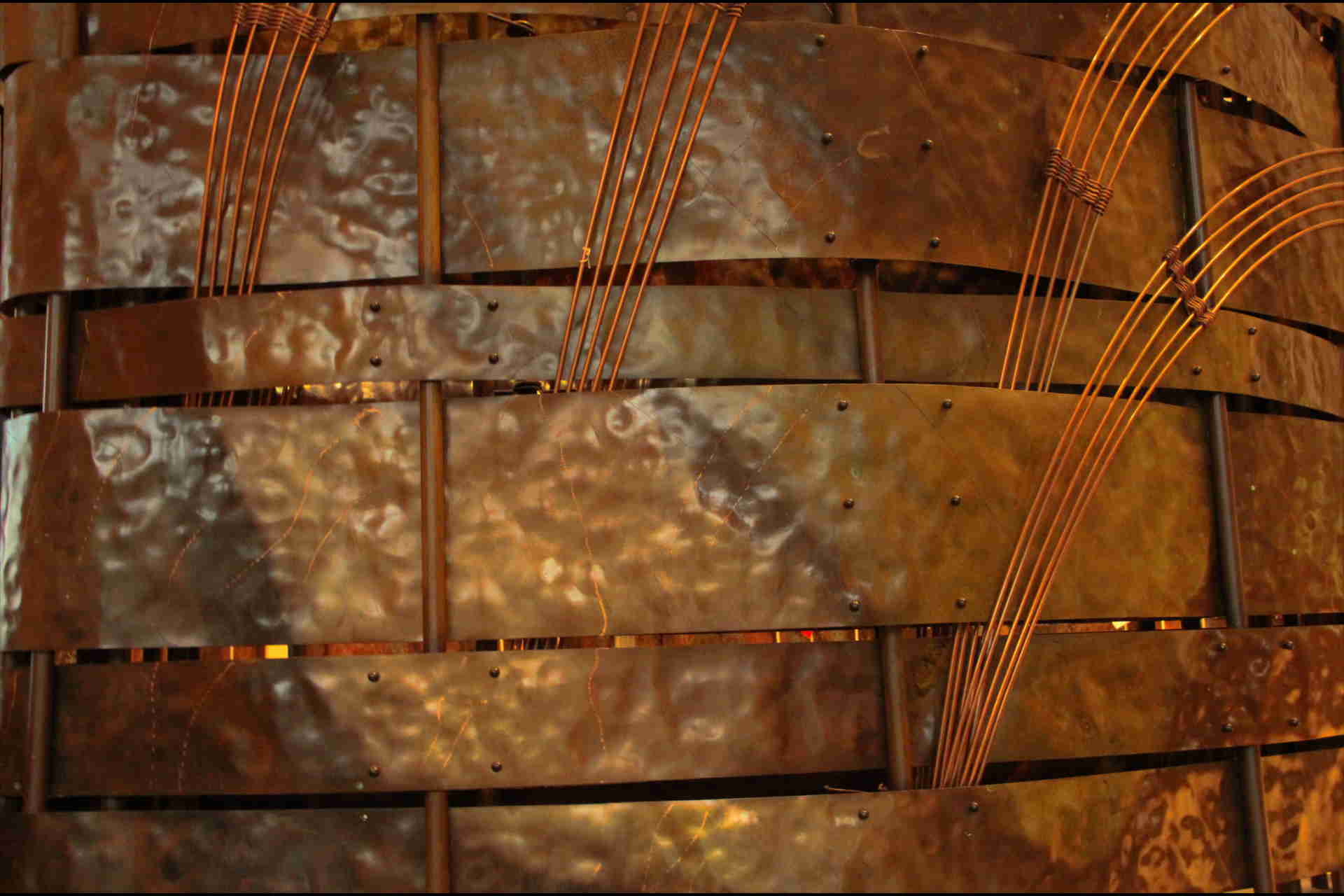 If you have ever found the time to pause and study the sky for a moment, you likely had a fleeting feeling of insignificance and a sense of awe. The sun, moon, planets, stars, and the vastness of the sky can be humbling. To further put your life into perspective, consider the equally awe-inspiring vastness of the microscopic universe. It is difficult to even imagine that strange universe and its innumerable invisible inhabitants. As we marvel at the universe’s beauty and splendor, we intuitively understand that it contains forces that constantly test the fragility of our humanity. We know from history and science that we can just as easily be wiped out by an asteroid as by a viral pandemic. Consequently, if the scientists who monitor our heavens advised us that an asteroid the size of the State of Texas was hurling our way, we would expect a massive concerted last-minute effort to avert the disastrous impact. Similarly, if the government and the medical community warned the public that we are losing the war against lethal drug-resistant microorganisms, we would all expect the highest level of concern and action. This blog post addresses the dangers posed by drug-resistant bacteria and other dangerous germs, and discusses how antimicrobial copper—an amazing metal that humans have relied on since the dawn of civilization—can be used to kill bacteria and viruses, help stop the spread of infections, and support public health.

Germs Have Wiped Us Out Before

In 1918, the Spanish Influenza infected one-third of the world’s population, and there are estimates that the virus killed as many as 100 million people. In the 1300’s, a plague known as “Black Death” killed about two-thirds of the people in Europe. The “Plague of Justinian” pandemic in 540 A.D. lasted 50 years and killed up to 100 million people in Europe in Asia. There have been other devastating epidemics throughout history—and, recently, we have witnessed the emergence of SARS, bird flu, swine flu, MERS, and deadly outbreaks. So, take that pause now. Look at the surfaces near you. Think of the millions of miles of surface space in our hospitals, gyms, transportation systems, clinics, nursing homes, elementary schools, and other public facilities, because they may be the new front lines of our war against deadly microbes.

CDC HAS SOUNDED THE ALARM

On April 23, 2013, the Centers for Disease Control and Prevention (CDC) released a Threat Report, entitled “Antibiotic Resistance Threats in the United States, 2013,” warning the public about the increasing danger posed by antibiotic-resistant bacteria. In its report, the CDC states that approximately 2 million people become infected by antibiotic-resistant bacteria every year in the United States—and roughly 23,000 of those infections are fatal. The CDC explained that antibiotics, which are our first- and second-lines of defense against deadly germs, are no longer effective, and cautioned that:

“Preventing the spread of antibiotic resistance can only be achieved with widespread engagement, especially among leaders in clinical medicine, healthcare leadership, agriculture, and public health.”

For thousands of years, civilizations have used copper, the soft, malleable and reddish-orange metal for various purposes. While nobody knows exactly when the metal was first used, it is known that prehistoric people made copper items during the Neolithic period. Some contend that the earliest copper artifact known is a set of copper beads from Iraq that date back to 9,000 BC, while others say it is a copper pendant from the same region that was made around 8,700 BC. Nonetheless, in the 8th millennium people used copper for coins and ornaments, and by 7,000 BC, Neolithic communities used the metal to make very crude tools. Copper usage became more common during the Copper Age, also known as the Chalcolithic Period, which spanned 6,000 BC to 4,000 BC. During the Bronze Age, people mixed metal with tin to produce a wider variety of ornaments, crockery, tools, weapons, and armament. Eventually, ancient civilizations in various parts of the world discovered innovative ways to use copper for sanitation and medicinal purposes.

According to the Copper Development Association (CDA), the Egyptians used copper to sanitize water, sterilize wounds, and treat itching, nerves, and headaches; the Greeks used it to treat leg ulcers and protect wounds; the Romans used it to treat venereal disease and other ailments; the Aztecs used it to treat sore throats; and copper was used in India and Persia to treat lung ailments.

At the turn of the 20th century, scientists in the United States rediscovered what the ancient world already knew—that copper metal is an effective antibacterial agent. In an article entitled “Pure Water in the Country” in the August 1910 edition of Suburban Life, author J.J. Cosgrove discussed how the germicidal activities of copper are an effective alternative to boiling water. He explained that a series of experiments conducted by the New York Board of Health demonstrated that copper coin surfaces killed bacteria. He stated:

“[s]trange to say, within a few hours after having been infected, copper coins were found to be perfectly sterile, or free from the microorganisms, showing conclusively that the copper in some way exercised a germicidal, or antiseptic influence on the bacteria…”

Crosgrove noted additional research that demonstrated that bacteria-infected water could by cleaned by either storing the water in copper containers or by submerging copper strips with clean surfaces in the tainted water. Crosgrove explained that:

“[c]opper has a decided germicidal action on typhoid and cholera germs in water, and that water can be effectively sterilized by storage in copper vessels for a sufficient period of time; or the same effect can be obtained by suspending in the vessel or tank, strips of metallic copper or copper foil… From the experiment conducted, it would appear that at least twenty-five square inches of copper surface will be required for each quart of water in a tank…”

Over the last decade, the scientific community worked to further understand copper’s antibacterial effectiveness. Extensive research established that bacteria do not survive on copper surfaces. Accordingly, in February 2009, the Environmental Protection Agency (EPA) announced that it would allow the CDA to make the marketing claim that copper alloy metal “kills 99.9% of bacteria within two hours.” Since the EPA’s announcement, the body of scientific research dedicated to antimicrobial copper has expanded. New research has focused on the antimicrobial effectiveness of copper surfaces against certain types of bacteria, copper’s effectiveness in health care and food-related settings, and the specific mechanism by which the metal kills bacteria and viruses.

For example, this year, new research discovered that metal alloy surfaces containing over 60% of copper rapidly inactivated the Norovirus which is the leading cause of viral gastroenteritis. The virus is highly infectious, and it can be especially lethal to health-compromised populations. The September 9, 2013 research paper, entitled “Inactivation of Norovirus on Dry Copper Surfaces,” explains that copper-allow surfaces can help reduce the spread of this virus in “high risk closed environments such as cruise ships and care facilities.”

In addition, the 2012 paper “Copper as an Antimicrobial Agent against Opportunistic Pathogenic and Multidrug Resistant Enterobacter Bacteria” published in the Journal of Microbiology, assessed copper’s ability to combat bacterial strains that are multidrug resistant. The study found that copper could be used to reduce drug-resistant bacteria in health care and food processing plants.

One-hundred years after the August 1910 Suburban Life article about germicidal copper surfaces, another study addressed how copper could be used to fight germs in health care settings. An August 2010 study entitled “Survival of Bacteria on Metallic Copper Surfaces in a Hospital Trial” demonstrated the real-world applicability of copper surfaces in a hospital setting. The study concluded that copper-alloy surfaces can help reduce the spread of multiple drug-resistant bacteria.

Other research has sought to determine how copper actually kills bacteria. Scientists contend that copper ions released from copper played a key role in killing bacteria in a study entitled “Killing of Bacteria by Copper Surfaces Involve Dissolved Copper.” In the paper “Bacterial Killing by Dry Metallic Copper Surfaces,” scientists theorized that copper surfaces kill bacteria by damaging the cell membranes of the bacteria–noting, by the way, that bacterial cell damage occurred within minutes of contact with copper, and that dry surfaces kill bacteria more efficiently than moist surfaces.

However, according to the Chemical Heritage Foundation (CHF), scientists have not been able to ascertain exactly how copper kills bacteria and there is no consensus in the scientific community. The CHF states the following on its website:

“Scientists don’t know exactly why copper and silver kill microbes so selectively, though there’s no shortage of theories. Some argue that copper and silver atoms denature key metabolic proteins inside microbes. Others have found evidence that the metals destroy the membranes of cells. Still other scientists believe that copper at least disrupts pathogens by conducting too much electricity: it literally short-circuits them.”

Most People Are Unaware

Unfortunately, despite the new developments and impressive body of research, most people are unaware of copper’s special antimicrobial properties. According to the Copper Development Association’s website:

“[t]he majority (84%) of U.S. adults indicate that they are not aware that bacteria don’t survive on copper surfaces.”

However, it is encouraging that as the scientific community works to learn more about antibacterial properties, new copper-based practical applications are being developed. For example, Professor Jaroslaw Drelich from Michigan Technological University (MTU) discovered a method of adding copper nanoparticle material to a compound called vermiculite. Drelich’s modified material killed 100% of E. coli bacteria in a sample of lake water. In its March 18, 2013 news release, MTU notes that the new copper-infused material could be mixed with other materials like cardboard and used in food packaging to kill bacteria and viruses and stave off food-borne illnesses.

In the meantime, let’s try and spread the word about the potential of this God-given metal.