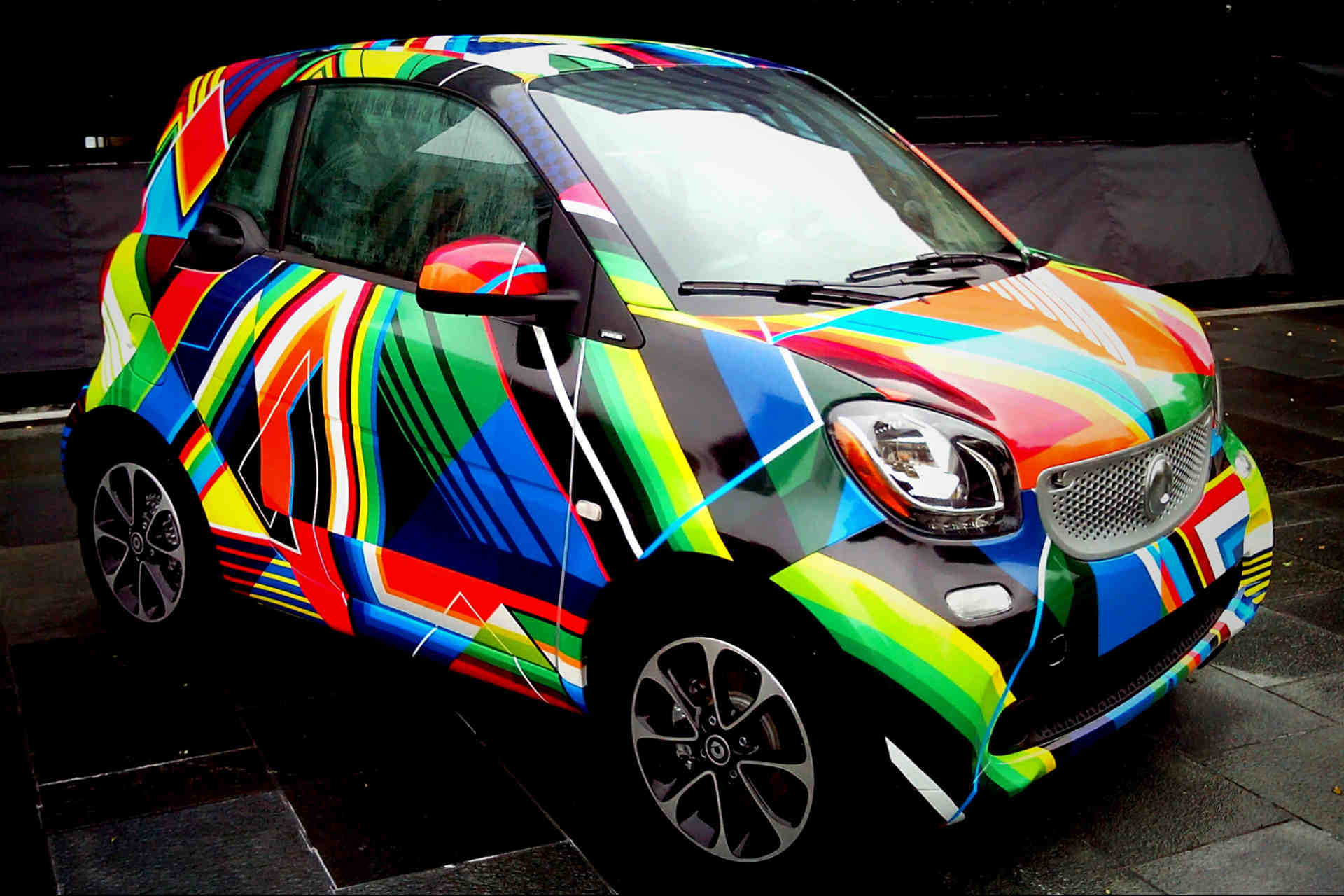 A series of local events are being held across the U.S. to introduce a newly-styled “urban microcar.” The car brand, smart (brand uses all lower case letters) is on a national tour that presents its all-new 2016 smart fortwo (words are intentionally combined) model lineup to locals in several major cities.

The smart USA Tour (#smartUSATour) (“smart tour”) gives folks in select cities a special opportunity to test drive the car. So far, the smart tour has been to New York City, Boston, and Washington, DC.

The Emphasis on Art

The smart tour is cleverly written sometimes as “sm(art) tour.” Mercedes-Benz USA (Mercedes-Benz Cars operates the smart brand) is rolling out the series of local events that includes live art performances by local artists as well as the opportunity for participants to create artwork. In addition, the national tour features a very colorful smart fortwo show car with custom graphics. As such, it makes sense that parenthesis are used to draw attention to the word “art.”

Incidentally, according to a page on Daimler AG’s website regarding the history of smart, the name smart “stood for a cute, intelligent car for the 21st century as well as being an acronym reflecting the origins of the concept: Swatch Mercedes Art.”

The Two-Day Event in DC

The sm(art) tour event in DC was held on October 2-3, 2015, at The Plaza at CityCenterDC (the 3 words are officially combined).

Test drives were scheduled in DC for Friday and Saturday, from 10:00 am to 5:00 pm. However, there was torrential rain on Friday, so I doubt there were many test drives that day. In addition, on both days, the test drives were supposed to be followed by a live art performance by local artist Hamilton Glass, from 7:00 pm to 8:00 pm.

I attended the event early Saturday, and test drives were being offered. The weather was gloomy. There was a tent, a few smart cars (including the fortwo show car with its bright, multi-colored graphic design), folks from the smart team, a huge truck with the smart logo, and a gentleman from the Mercedes-Benz dealership in Tysons Virginia.

A person from the smart team told me that Friday’s live art performance was cancelled due to bad weather (clearly understandable as it relentlessly poured all day on Friday), and the smart team did not know whether the artist would perform, as scheduled, Saturday evening.

I should note that my first impression of the older smart fortwo car was not favorable. My previous experience with the fortwo was limited to seeing the Car2Go ride-sharing versions in the city. I thought the car was just too small, and I did not like the exterior design. I never checked out the interior of the older fortwo car, and I never drove the car. The tiny vehicle appeared cramped and awkward to me. Admittedly, I never paid much attention to the car when I would see it.

However, my opinion about the car has changed. The 2016 model actually looks sporty and fun to me.

Prior to attending the sm(art) tour event in DC, I looked at pictures of the vehicle online, and I thought that it was stylish. Needless to say, I was very eager to get a first-hand glimpse of the car.

The smart fortwo has four models: the pure, prime, passion, and the proxy. All of the models are nice looking. While the new 2016 car still resembles its predecessor, the changes are a big improvement. A person from the smart team showed me the older version on his tablet, and he pointed out some of the stylistic differences of the new model. The 2016 smart fortwo is a bit wider than the older version, and it has a more muscular body than its predecessor.

It is worth noting that the engine is in the back of the car, and the vehicle has a steel “tridion safety cell” to protect the driver and passenger if there is an accident.

As per its name, the car only seats two, but the cabin is roomier than I expected. In addition, you can fit a few items in a small compartment in the back of the car, and the front passenger seat folds to allow more space for transporting additional items.

The inside of the car is stylish, and I really liked the two-tone interior of the proxy model (below) that was at the event.

Also, as per below, the exterior styling looks nice too. I particularly like how the blue is complimented by the white grill. I also like how the trim goes up the side of the front window, along the roof, down the back, then along the bottom of the car.

There are a lot of small cars in Europe. My wife, who is from a European country, likes small vehicles and living in the city. In fact, she is interested in getting a scooter, well, to scoot about town. I am concerned for her safety, and she would not be able ride a scooter in the winter.

I had gone to the event alone, and I wasn’t able to stay long. I planned to return with my wife so she could check out the smart fortwo and possibly test drive it. We were busy later that day so we were not able to return.

I think the smart fortwo might be ideal for her, and she really likes the way the car looks. While we missed the opportunity for her to give the car a spin at the sm(art) tour event, she might be interested in test driving the smart fortwo at the Mercedes-Benz dealership in Tysons, VA.

The fortwo certainly seems to be a suitable car for the urban lifestyle.

The tiny automobile can zip about the city, slip into tight parking spots, save money at the gas pump, and the diminutive yet jazzy car is an expression of individuality and stylish practicality.

The car seems especially fitting for the busy and free-spirited urban dweller who frequently navigates from one spot to another in a congested city.